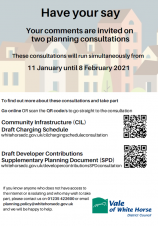 Two consultations launch this week into how Vale of White Horse District Council raises money for infrastructure and community facilities needed to support planned growth across the District.

The council is asking the public and local businesses and organisations to comment on the draft Community Infrastructure Levy (CIL) Charging Schedule and the draft Developer Contributions Supplementary Planning Document (SPD).

These consultations relate to how the council raises money for infrastructure – the council also recently updated its strategy on how it spends that money.

The council's current CIL Charging Schedule came into effect in November 2017. Since then, Part 2 of the Vale Local Plan 2031 has been adopted, which includes additional site allocations which mean additional infrastructure is required to support the planned growth. This, together with changes to the CIL Regulations has resulted in the need for the council's CIL Charging Schedule to be reviewed.

The council has also undertaken a review of its current Developer Contributions Supplementary Planning Document (SPD), which was adopted in September 2017. This is used to seek developer contributions through Section 106 Agreements from new developments to fund infrastructure alongside CIL.

The consultations on both draft documents run from Monday 11 January until midnight on Monday 8 February.

How to view the consultation documents and take part

All documents available for comment for both consultations can be viewed and accessed electronically via the respective consultation pages for the CIL Charging Schedule and the Developer Contributions SPD.

Hard copies of the consultation documents have been placed at the district council offices on Milton Park, however unfortunately the offices are currently closed to the public due to the Covid-19 pandemic. To view hard copies, please get in touch on planning.policy@whitehorsedc.gov.uk or 01235 422600 to discuss options.